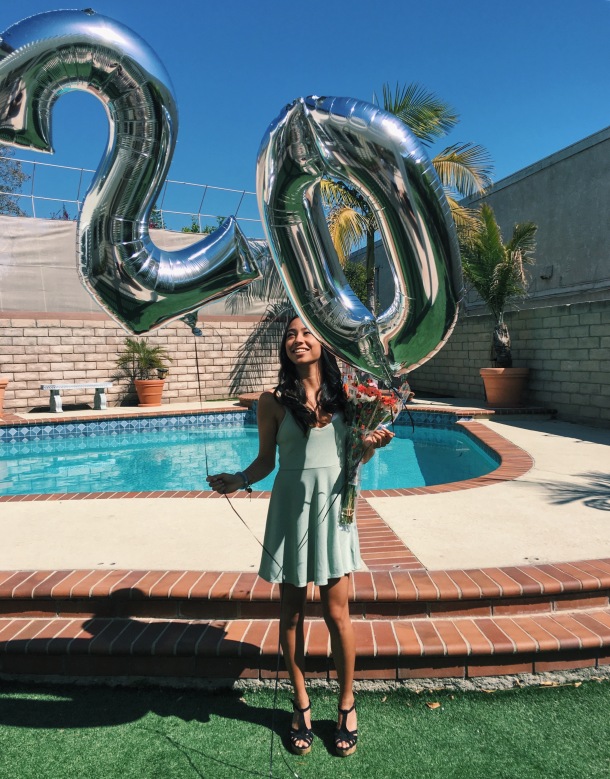 Hello, everyone! This is a little late because I’ve been super busy lately, but my last spring break adventure was for my 20th birthday, and I celebrated it in sunny San Diego! Around 10am that Thursday morning, my friend showed up with huge number balloons, a beautiful bouquet of flowers, and a Starbucks drink all for me. I could immediately tell it was going to be a wonderful birthday. After finishing curling my hair and packing up some stuff for the day, I took some pictures with my awesome balloons before we headed out. In the car, we played some relaxing tunes which made the 2 hour car ride seem not so bad and I couldn’t wait for the festivities to start! 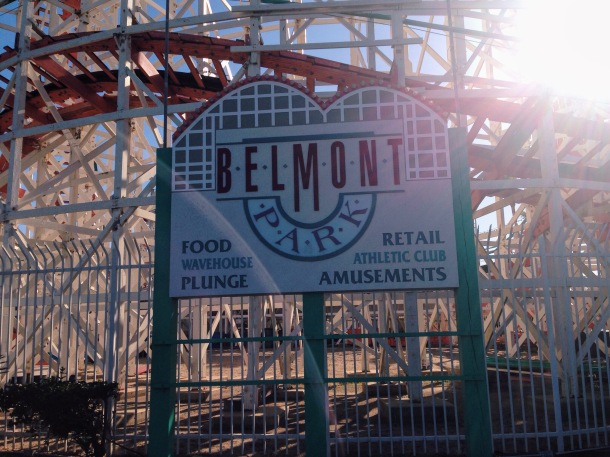 Once we got to San Diego, we arrived at Rum Jungle Cafe right around lunch time. It was a small little restaurant right by the beach, with a very local and tropical feel to it. It wasn’t too crowded, so after studying the menu for a bit, we both decided to get a chicken pesto sandwich and share an “island breeze” smoothie. My sandwich was pretty good and I ate most of it (which is always a challenge for me), and the smoothie was good, too, but had a little too much banana in it for my taste. Time for our next stop: the beach. 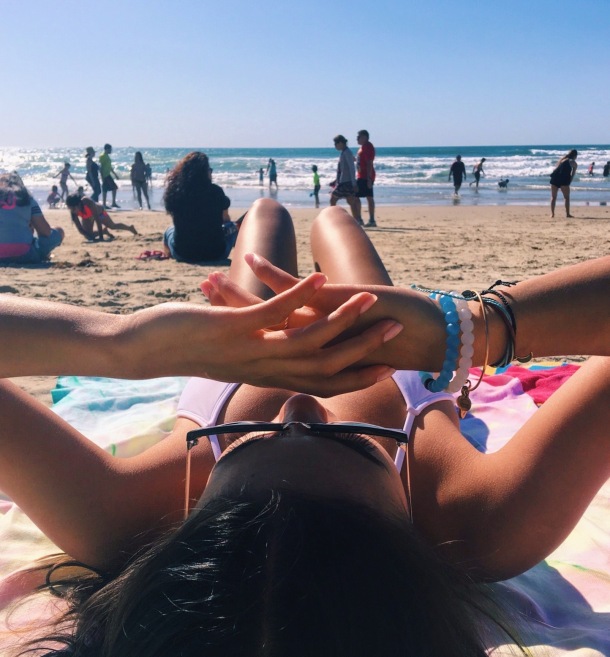 When we got there, we got super lucky with finding a parking spot right across the street from the beach and it was free for the whole day, too. I was happy about this because to me paying for parking is almost as bad as paying for shipping… At first the weather seemed a little chilly, but it actually turned out to be perfect. Not too hot, not too cold, but just right (like Goldilocks’ porridge). It truly was a beautiful day on Mission Beach. Before we laid out on the sand I wanted to check out Belmont Park, which leads right to the beach. Belmont Park has a sort of carnival feel to it, with swim/surf shops, game booths, food kiosks, and small rides. It was actually a lot smaller than I thought it was going to be, but it was a good opportunity to see the locals. Then, we settled ourselves on the soft sand, as close to the water as possible. 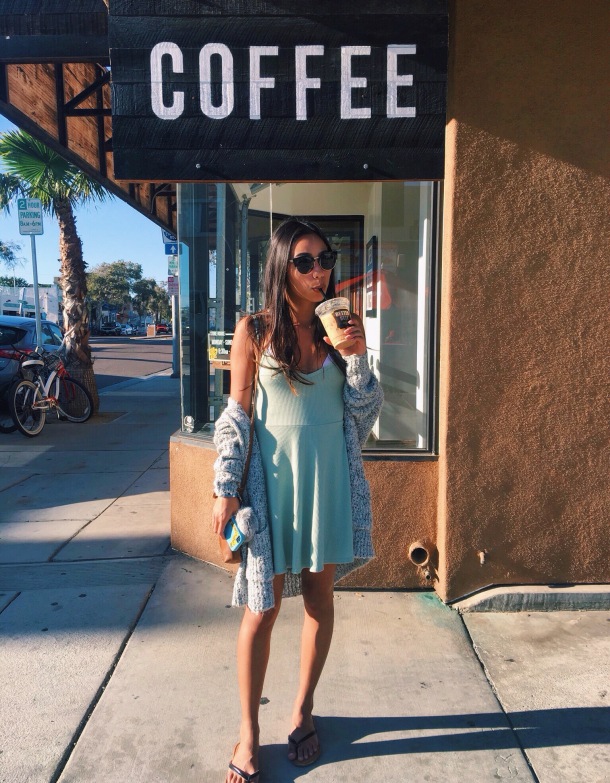 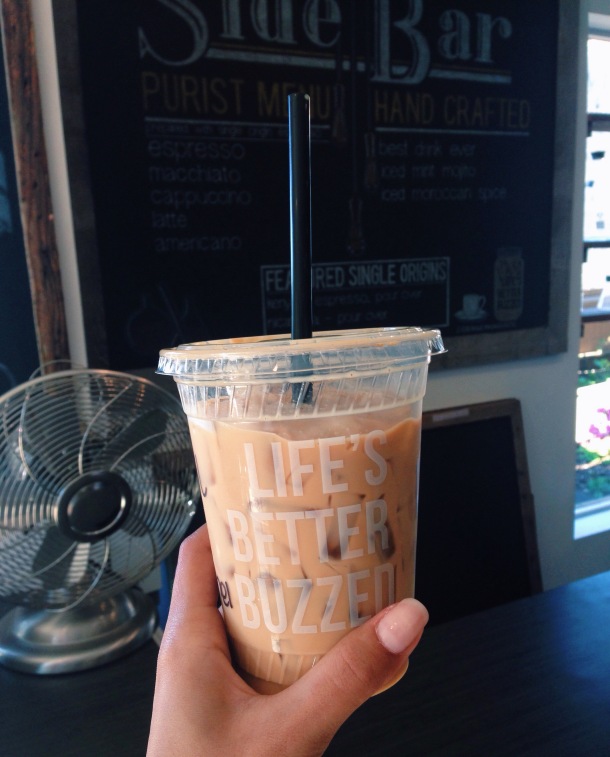 After awhile I got bored and wanted to take some pictures in my new bikini (duh), so I made my friend follow me to the shoreline. The water was way too cold to go in, but when I was satisfied with the way most of the pictures came out, we laid back down to tan some more. Then, I wanted to go to Better Buzz Coffee, which we had passed on the way over. Since we didn’t want to lose our awesome parking spot, we decided to walk even though it would take 20 minutes. Honestly, neither of us really minded as it was such a lovely day and we got to walk on the boardwalk right along the beach. We spent most of the walk reminiscing about which giant beach house we liked the best and would want to live in one day if we ever became rich enough. 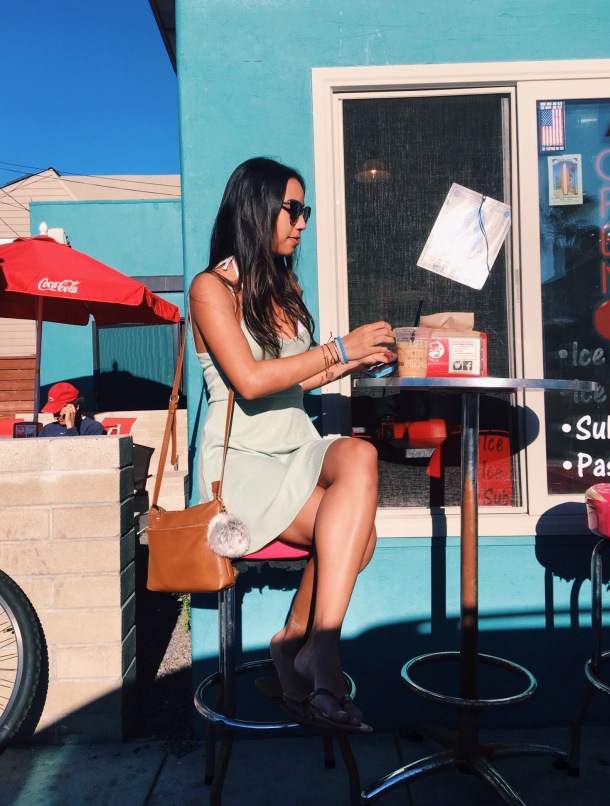 The coffee shop turned out to be a very cute little cafe with a beachy vibe to it that wasn’t too crowded. I asked the cashier if the vanilla latte or vanilla bean latte was better, and she recommended the vanilla bean. So, I got an iced vanilla bean latte to go, and indeed it was very delicious. I made my friend take more pictures of me because I wanted some in my new dress, too, as I’d bought it only a couple days before my birthday. I also found a little table outside a nearby restaurant to take pictures at. I was a very happy camper. 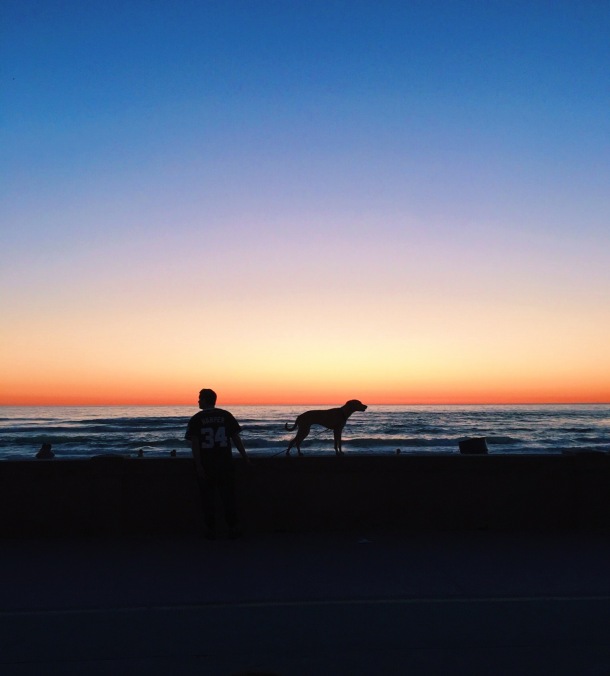 We walked back toward the beach, as we’d made reservations at one of the restaurants on the boardwalk so that we could have dinner on their outside patio and watch the sunset. Since we had some time, we stopped in one of the shops in Belmont Park to browse in some of the surf stores. Then, we arrived at Draft. They had our table ready for us in a few minutes and it had the perfect view of Mission Beach. The food was delicious, but I was mostly excited about the sunset and for good reason because it was absolutely gorgeous. A lot of fellow San Diego locals and visitors came out on the boardwalk to see it and take pictures. It was truly the perfect way to end the perfect birthday and start the rest of my days as a 20 year old.