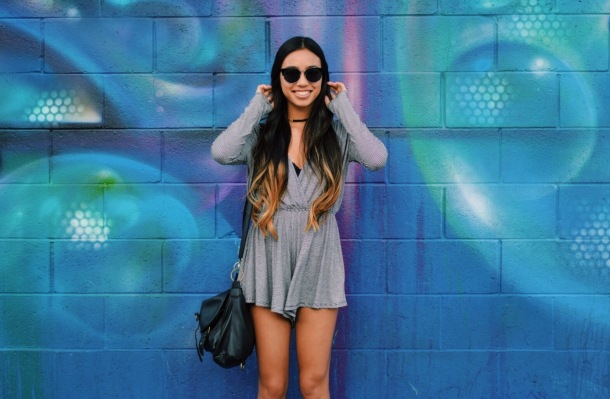 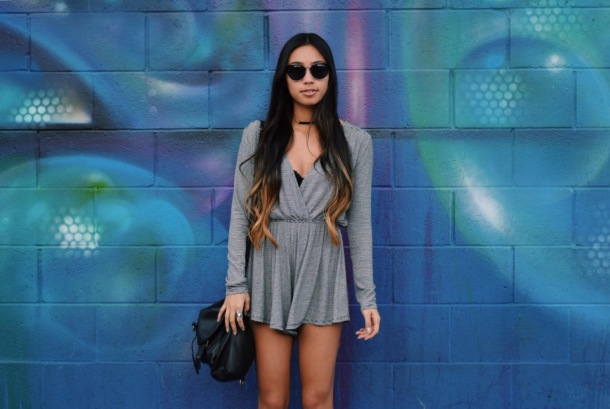 Valentine’s Day this year started a little bit early and took place mainly in the Arts District in LA. I hadn’t really explored much of that part of LA before and I had the perfect outfit planned! My friend and I found a parking structure that didn’t charge a million dollars for only a few hours of parking (score!) and we got straight to wandering the graffiti-covered streets. We discovered an artsy wall where my friend took my OOTD before deciding to find somewhere to eat nearby. I used my trusty Yelp app to search for some cafes close by (I’m a sucker for any cute cafes and luckily LA is filled with them) and discovered that there was an Urth Caffé only about a six minute walk from us. Perfect, right?

Well, as I’m pretty terrible with directions, I let my friend lead the way… and we ended up going the wrong direction and it took us another twenty minutes of walking before we got there. When we did arrive, I was pleasantly delighted with the atmosphere and the shade, as it was a very hot day in LA. My friend ordered a coffee shake and I ordered a fruit smoothie and a half turkey sandwich for us to share. We sat there cooling off for awhile before deciding where we wanted to head next. We decided to go to Little Tokyo, as it was pretty close to where we were already, and because I wanted to check out Weller Court.

Weller Court is a small shopping plaza in Little Tokyo that is now more commonly known for it’s “Hotline Bling” music video looking tunnel. However, I didn’t think it would be dark enough for the lights in the tunnel to be turned on yet (which was the whole point), so we walked around downtown Little Tokyo first, explored the shops, and then sat down to rest our sore feet. It started getting later so we went to Shin-Sen-Gumi Hakata Ramen, the best ramen place ever in my opinion, to grab dinner and replenish our energy. Next, we headed to the Weller Court tunnel, which we found by following another group of girls who seemed to be looking for the same thing. After watching them take cute, but basic, pictures of each other, I hopped in the tunnel for my turn.

Weller Court was a pretty cool place and luckily there weren’t that many people walking by, so we got a few good pictures in. Before driving back home we needed to make a pit stop and decided to go into another little hipster cafe right by the tunnel called Cafe Demitassé. This of course compelled me to buy a hipster drink so I ordered their LA Weekly approved “Lavender Hot Liquid Chocolate with a toasted, giant marshmallow.” While it looked very cute, I could have done without the lavender and the marshmallow, but maybe that’s just me. Overall, it was a great early start to the Valentine’s Day weekend!

To me Valentine’s Day is also about the love you have for your friends. So, I spent the next day of my Valentine’s Day weekend with some of the friends I love most. Earlier in the week, since it had been sweltering hot the past few days, some of us decided to go to the beach that weekend. Well, Chantel suggested we go to the beach and there was no way I was going to turn down an opportunity to go to one of my favorite places on Earth. Since I was going to be home in Torrance instead of on campus, we decided to go to a beach near me. All the way from Pomona, Chantel, Danielle, and Bri drove down to take this sun child (me) to my happy place (the beach). Of course, they were late. 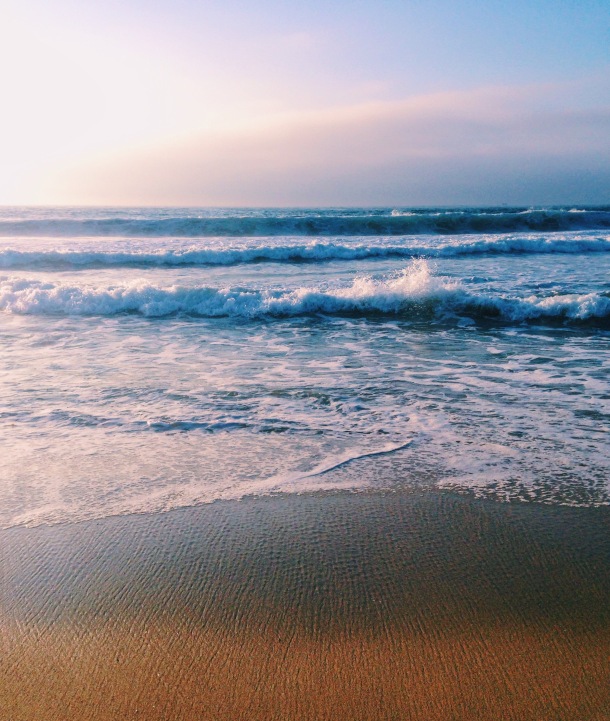 By the time they got there it was already late afternoon and the sun seemed to be disappearing into an ominous gloom… It was just our luck that the one day we wanted to go to the beach it wasn’t scorching hot. Still, we weren’t going to let something like the temperature stop us. When we got to the beach it was chilly, but it seemed to warm up a bit once we settled ourselves on the sand. Bri brought candy and snacks (the best kind), so obviously we dug into that while talking about the usual girl stuff, boys and clothes. 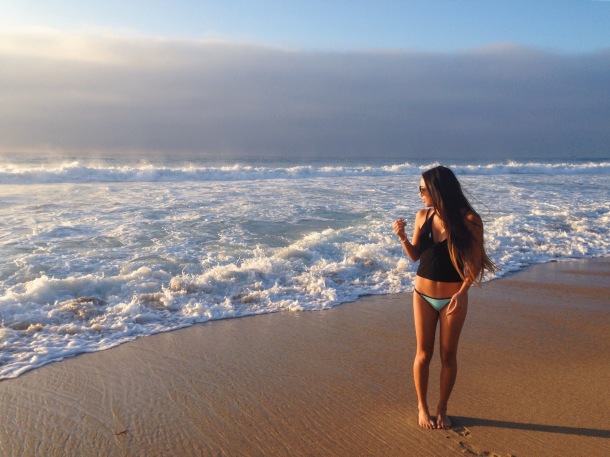 And, what’s any girls date without pictures? Pictures of the (freezing cold) ocean, of each other, and of ourselves all took place while being recorded on Snapchat at the same time. We took a Polaroid picture with Danielle’s camera that turned out okay, and also one with my camera, in which Chantel decided to make it more of a selfie than a group photo… It’s the thought that counts, right? After a couple hours it started getting too cold, Bri had to get home, and our Galentine’s Day date came to an end. 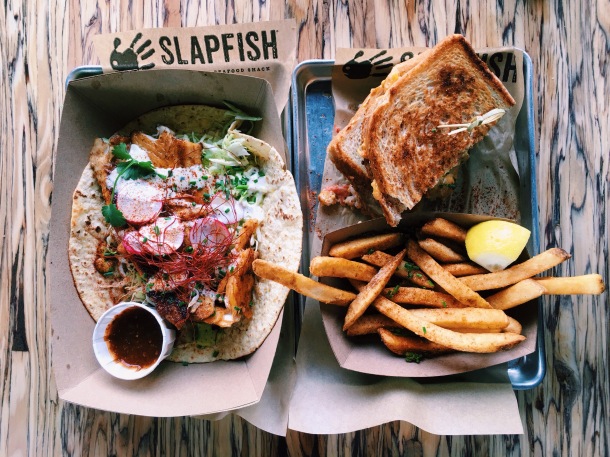 It was finally Sunday, or actual Valentine’s Day, and that meant I got to spend the day with my mom before heading back to school! After some grocery shopping, I told my mom I wanted to eat somewhere new for lunch, as I’m always trying to go places I’ve never been before. She agreed as long it was somewhere on the way back to school, so I looked up some high rated places on my Yelp. Soon, I had found the perfect place in Brea called Slapfish. It was a place I’d seen on @dailyfoodfeed‘s Instagram that I’d been wanting to try, as they always posted mouthwatering pictures of seafood from there. I love seafood, especially crab, shrimp, lobster, scallops… When we got there it was super crowded, even though it was almost 2pm. Apparently we did not beat the lunch rush hour, as we were waiting forever for an empty table to open up. The place seemed fairly new and was pretty small, but I was excited to have found a casual seafood restaurant. When we did get a table, my mom told me she had ordered us a Valentine’s Day surprise. Hmm, what could it be? 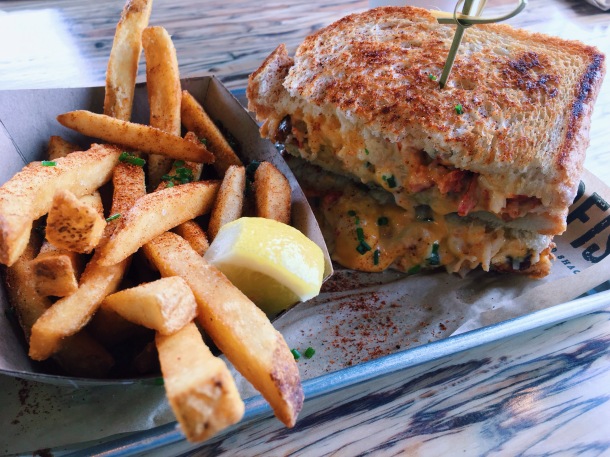 While I don’t have them pictured, my mom had ordered us two crab-filled beignets (no where near your typical beignet) that were available for Valentine’s Day only. And they were delicious! I mean, I love crab and those little crab-filled balls were to die for, especially with the sauce they provided, too. This made me even more excited for my food, as I hadn’t had seafood in awhile, and I ordered a “Clobster Grilled Cheese Sandwich,” or a grilled cheese sandwich filled with crab and lobster. My mom ordered some of the fish tacos, and since she got her food first, I made her wait for mine to come so I could take a picture (as usual). It was worth the wait! Although my sandwich was very rich, it was still very delicious, as well as the seasoned fries, and the weird flavored sodas Slapfish offered. All in all, I had an amazing day with my mom, and it was a great end to an even better weekend.